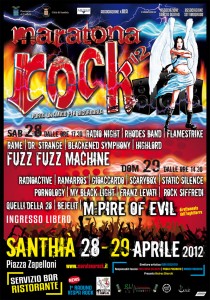 Directly from UK, the “M-pire Of Evil“, rock band launched in 2010 by Jeff “Mantas” Dunn (guitar) and Tony “The Demolition Man” Dolan (bass-vocalist), two world giants in metal rock, former member of the legendary VENOM, played the first ever Italian preview of the new piece “Hell To The Holy”. A terrific event that that created an explosive atmosphere warming up the enthusiasm of the great attendance of “real rock” lovers.

A great return the mythical FuZZ FuZZ MaCHiNe on our stage after the great performance during the MaratonaRock 2010.

An original and funny side-event proposed by the new born VESPA-CLUB Santhia’ has been held 2012 on Sunday, April 29th.

This site uses Akismet to reduce spam. Learn how your comment data is processed.