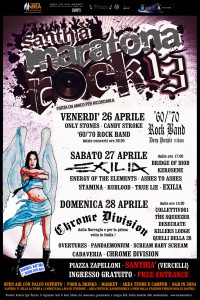 Program competed; over 75 bands applied to show. Great new for this year, 21 bands coming from all over Italy.

Sunday 28th evening great event by the norvegian project-band CHROME DIVISION, the creator of the “Dirty Doomsday Rock & Roll”. First ever Italian event in the Maratona Rock 2013, the Chrome Division, will have as guitar player Shagrath, the singer of the mythical Dimmu Borgir.

Program of the 3 days event: 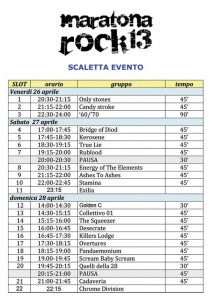 Side event to MaratonaRock 2013 is the 2° edition of the Vespa Rock, held on sunday 28th, with a big meeting of Vespa lovers and a 200km scooter-ride open to all.

The festival was born in 2009, to commemorate the memory of Bea (Beatrice Bedon), a teenager from Santhià who left in 2008 in a tragic motorbike crash. The festival is organized by Bea’s parents and a large group of their friends to remember Bea through Heavy Metal, the music she loved.

Year after year Maratona Rock has grown up: started as a one day concert of local bands, during the last two years it became a two days open air festival, featuring bands like Folkstone and Mpire of Evil as headliners.

Maratona Rock is a 100% free event, financed by sponsors and with the services offered during the festival, like catering & merchandising.

Maratona Rock is connected with the Association “xBea” (forBea), a no profit organization that promotes many charity events focused to the young.The Association xBea has promoted in October 2012 the MaratonaRock for Finale Emilia, a special event to help Italian people from Emilia Romagna, a region recently strongly struck by earthquake.

We are now running the organization the MaratonaRock 2013 edition. Help us to make this beneficial live show bigger and stronger, in memory of Bea. Like this page on Facebook page and keep the metal flame alive!

2013 event will be held on the great open-air Zapelloni Plaza in Santhià and is free-access for the fans.

This site uses Akismet to reduce spam. Learn how your comment data is processed.